Symptomatic treatment of allergic rhinitis, such as hay fever.

Adults and children over 12 years: 1-2 sprays per nostril every 8-12 hours. Do not exceed the recommended dose. Duration of treatment: advise the patient that, in the absence of a complete therapeutic response within a few days, he must consult the doctor; in any case, the treatment must not be continued for more than 4 days. Pediatric population: the medicinal product is contraindicated in children below 12 years of age (see section 4.3). Method of administration: The bottle must be used holding it vertically, to obtain spray nebulizations. For a correct use of the nebulizer, proceed as follows: Remove the protective cap after blowing your nose, keeping the head in the normal position, introduce the olive into the nostril and spray by pressing the bottle evenly once or twice with quick and energetic strokes. After nebulization, inhale deeply with your mouth closed, pressing lightly with your index finger on the other nostril, in order to ensure that the solution is distributed over the entire nasal mucosa. Then repeat the application in the other nostril. The empty space above the liquid is necessary for a perfect functioning of the bottle as a nebulizer. After use it is recommended to clean the olive and put on the protective cap. 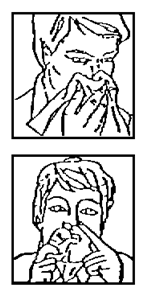 Fexallegra nasale is contraindicated in the following cases: • Hypersensitivity to the active substances or to any of the excipients listed in section 6.1. • rhinitis sicca. • Heart disease and severe arterial hypertension. • Acute angle glaucoma. • Hyperthyroidism, prostatic hypertrophy. • Pregnancy and breastfeeding. • After cranial surgery performed nasally. • Children under the age of 12.

Antidepressant drugs and vasopressor drugs: Due to the presence of the sympathomimetic agent tramazoline hydrochloride, Fexallegra nasale must not be administered together with antidepressant drugs and in the two weeks following the administration of the latter. The administration of nasal Fexallegra concomitantly with antidepressant drugs (MAO inhibitors or tricyclic antidepressants) or with vasopressor drugs, can cause an increase in blood pressure. Use in combination with tricyclic antidepressants can also cause arrhythmias. MAO inhibitors and tricyclic antidepressants may prolong and intensify the anticholinergic and central nervous system (CNS) depressant effects of chlorpheniramine maleate. CNS depressant drugs: Alcohol, sedatives, opioid analgesics, hypnotics can cause increased sedation effects due to the antihistamine chlorpheniramine maleate. Phenytoin: When taken concomitantly with phenytoin, chlorpheniramine maleate may lead to decreased elimination of phenytoin with an increased risk of phenytoin toxicity. Antihypertensive drugs: Interactions with antihypertensive drugs, especially those whose action involves the sympathetic nervous system, can be complex and lead to various cardiovascular effects.

Symptoms An increase in blood pressure and tachycardia can, especially in children, be followed by a fall in blood pressure, subnormal temperatures, shock and reflex bradycardia. Similarly to other alpha-sympathomimetic drugs, the clinical picture of intoxication with nasal Fexallegra can be confused, since phases of stimulation and depression of the central nervous system and the cardiovascular system can alternate. Especially in children, intoxications produce effects on the Central Nervous System such as convulsions and coma, bradycardia, respiratory depression. Central nervous system stimulation symptoms are anxiety, agitation, hallucinations and convulsions. Central nervous system depression symptoms are hypothermia, lethargy, drowsiness and coma. In addition, the following symptoms may occur: mydriasis, miosis, sweating, fever, pallor, cyanosis of the lips, cardiovascular dysfunction, including cardiac arrest, respiratory dysfunction, including respiratory failure and respiratory arrest, psychological alterations. Similarly to other H1 antagonist drugs, in the case of acute intoxication with chlorpheniramine maleate, the greatest danger is represented by central excitatory effects. The syndrome includes hallucinations, excitement, ataxia, athetosis and convulsions. Dilated and fixed pupils with a flushed face may be found, along with sinus tachycardia, urinary retention, dry mouth and fever. Therapy In case of nasal overdose, wash or clean the nasal mucous membranes carefully immediately. Symptomatic treatment may be required.