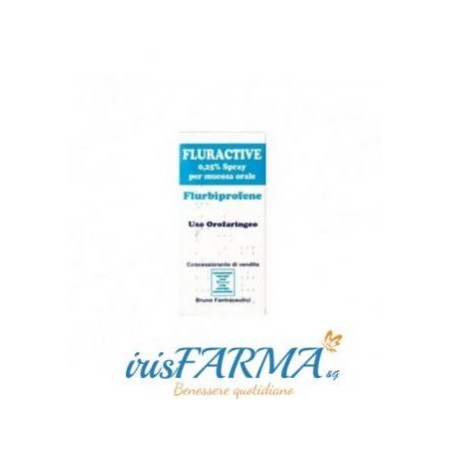 ► Indicated in case of pain and inflammation of the throat.

► Well-being of the throat and mouth.

Hypersensitivity reactions to NSAIDs have been reported and these may consist of: (a) non-specific allergic reactions and anaphylaxis (b) respiratory tract reactivity, e.g. asthma, aggravated asthma, bronchospasm, dyspnoea (c) various skin disorders, including eg skin rashes of different types, pruritus, urticaria, purpura, angioedema and, more rarely, exfoliative and bullous dermatosis (including epidermal necrolysis and erythema multiforme). The most commonly observed adverse reactions are gastrointestinal in nature. Local use of the drug, especially if prolonged, can give rise to sensitization or local irritation. In such cases, treatment must be interrupted and appropriate therapy instituted if necessary. The following undesirable effects have been reported, particularly after administration of formulations for systemic use. They refer to those detected with the use of flurbiprofen used in the short term and at doses compatible with the classification of self-medication. Additional side effects may occur when treating chronic conditions and for long periods of time. Undesirable effects associated with the use of flurbiprofen are categorized below by system organ class and frequency. Frequencies are defined as: very common (≥1 / 10), common (≥1 / 100,

At the recommended doses, when using the medicine in its various pharmaceutical forms, any swallowing does not cause any harm to the patient, as the dose of flurbiprofen is much lower than that commonly used in systemic treatments. Senior citizens Elderly patients have an increased frequency of adverse reactions to NSAIDs, especially gastrointestinal haemorrhage and perforation, which can be fatal. Respiratory pathologies Cases of bronchospasm have been reported with flurbiprofen in patients with a history of bronchial asthma or allergies. Flurbiprofen should be used with caution in these patients. Other NSAIDs It is advisable not to combine the medicinal product with other NSAIDs (see section 4.5). Systemic lupus erythematosus (SLE) and mixed connective tissue disease Patients with systemic lupus erythematosus and mixed connective tissue disease may have an increased risk of aseptic meningitis (see section 4.8), however this effect is not usually seen with products intended for limited and short-term use such as flurbiprofen. Cardiac, hepatic and renal impairment The medicine should be used with caution in patients with heart, kidney or liver failure. NSAIDs have been reported to cause various forms of nephrotoxicity, including interstitial nephritis, nephrotic syndrome and renal failure. Administration of an NSAID can cause a dose-dependent reduction in prostaglandin formation and precipitate renal failure. Patients at the highest risk of developing this reaction are those with impaired renal function, heart failure, hepatic dysfunction, those on diuretic therapy and the elderly; however, this effect is not usually observed with products intended for limited and short-term use such as flurbiprofen. Cardiovascular and cerebrovascular effects Caution is required before starting treatment in patients with a history of hypertension and / or heart failure (discuss with your doctor or pharmacist), as fluid retention, hypertension and edema have been reported in association with NSAID treatment. Clinical studies and epidemiological data suggest that the use of some NSAIDs, especially at high doses and for long-term treatments, may be associated with a modest increased risk of arterial thrombotic events such as myocardial infarction or stroke. There are insufficient data to exclude such a risk for flurbiprofen. Patients with uncontrolled hypertension, congestive heart failure, established ischemic heart disease, peripheral arterial disease and / or cerebrovascular disease should only be treated with flurbiprofen after careful consideration. Similar considerations should be made before initiating long-term treatment in patients with risk factors for cardiovascular disease (eg, hypertension, hyperlipidaemia, diabetes mellitus, smoking). Effects on the central nervous system Analgesic-induced headache. Headache may occur in case of prolonged or unregulated use of analgesics, which should not be treated by increasing the dose of the medicine. Gastrointestinal Effects Flurbiprofen should be administered with caution to patients with a history of peptic ulcer and other gastrointestinal diseases as these conditions may be exacerbated. The risk of gastrointestinal bleeding, ulcer or perforation is higher with increasing flurbiprofen dosage in patients with a history of ulcer, particularly if complicated with haemorrhage and perforation and in the elderly. These patients should start treatment with the lowest available dose. Gastrointestinal bleeding, ulcer or perforation have been reported with all NSAIDs at any time during treatment. These adverse reactions can be fatal and can occur with or without warning symptoms or with a previous history of severe gastrointestinal reactions. Patients with a history of gastrointestinal disease, especially if elderly, should report any unusual abdominal symptoms (especially gastrointestinal bleeding) in the initial stages of treatment. Undesirable effects can be minimized by using the lowest effective dose for the shortest possible duration of treatment needed to control symptoms (see section 4.2). Caution should be advised in patients receiving concomitant medications that may increase the risk of ulceration or bleeding, such as oral corticosteroids, anticoagulants such as warfarin, selective serotonin reuptake inhibitors or antiplatelet agents such as acetylsalicylic acid (see section 4.5). When gastrointestinal bleeding or ulceration occurs in patients taking flurbiprofen, treatment should be stopped. Dermatological effects The use of the medicine, especially if prolonged, can give rise to sensitization phenomena or local irritation. In such cases, treatment should be interrupted and a doctor consulted to establish, if necessary, a suitable therapy. Serious skin reactions, some of them fatal, including exfoliative dermatitis, Stevens-Johnson syndrome and toxic epidermal necrolysis, have been reported very rarely in association with the use of NSAIDs (see section 4.8). Flurbiprofen should be discontinued at the first appearance of rash, mucosal lesions or any other signs of hypersensitivity. Infections Since isolated cases of infection-related exacerbation of inflammation (e.g. development of necrotizing fasciitis) have been described in temporal association with systemic use of NSAID drugs, it is recommended that patients seek immediate medical attention if the appearance or worsening of signs of a bacterial infection during flurbiprofen therapy. A possible indication should be considered at the start of antibiotic therapy. If mouth irritation develops, treatment should be discontinued. Important information about some of the excipients FLURACTIVE Mouthwash and FLURACTIVE Spray contain: - para-hydroxybenzoates which can cause allergic reactions (even delayed) - hydrogenated castor oil-40 polyoxyethylenate which can cause localized reactions on the skin. Do not use for prolonged treatments beyond 7 days. If no appreciable results are seen after 3 days of treatment, the cause could be a different pathological condition. In these cases it is advisable to consult your doctor.

Pregnancy Flurbiprofen should not be administered during the first and second trimester of pregnancy unless strictly necessary. The use of flurbiprofen during the third trimester of pregnancy is contraindicated. Feeding time In a limited number of studies, flurbiprofen appears in breast milk in very low concentrations and is unlikely to have adverse effects on the breastfed infant. However, administration of flurbiprofen is not recommended in nursing mothers. Fertility There is evidence indicating that cyclooxygenase / prostaglandin synthesis inhibitors may cause impairment of female fertility by an effect on ovulation. This is reversible upon discontinuation of treatment.

Caution should be exercised in patients treated with any of the medicines listed below, as interactions have been reported in some patients. However, inform your doctor if you are taking other medicines. Flurbiprofen should be avoided in combination with: - Acetylsalicylic acid: unless the intake of acetylsalicylic acid in low doses (not exceeding 100 mg / day or local prophylactic doses for cardiovascular protection) has been recommended by the doctor; as with other NSAID-containing medicinal products, concomitant administration of flurbiprofen and acetylsalicylic acid is generally not recommended due to the potential for increased undesirable effects (see section 4.4). - Cox-2 inhibitors and other NSAIDs: concomitant use of other NSAIDs, including selective cyclooxygenase-2 inhibitors, should be avoided due to potential additive effects and an increased risk of adverse reactions (see section 4.4). Flurbiprofen should be used with caution in combination with: - Anticoagulants: NSAIDs may potentiate the effects of anticoagulants such as warfarin (see section 4.4). - Antiplatelet agents: increased risk of gastrointestinal bleeding. - Selective Serotonin Reuptake Inhibitors (SSRIs): increased risk of gastrointestinal bleeding. - Antihypertensives (diuretics, ACE inhibitors and angiotensin II antagonists): NSAIDs may reduce the effect of diuretics. Other antihypertensive drugs may potentiate nephrotoxicity caused by cyclooxygenase inhibition, especially in patients with impaired renal function (these patients must be adequately hydrated). - Alcohol: it may increase the risk of adverse reactions, especially of bleeding in the gastrointestinal tract. - Cardiac glycosides: NSAIDs can exacerbate heart failure, reduce VGR (glomerular filtration rate) and increase plasma glycoside levels. - Ciclosporin: increased risk of nephrotoxicity. - Corticosteroids: increased risk of gastrointestinal ulcer or haemorrhage with NSAIDs (see section 4.4). - LithiumThere is evidence for a possible increase in plasma lithium levels. - Methotrexate: there may be an increase in plasma levels of methotrexate. - Mifepristone: NSAIDs should not be used for 8-12 days after administration of mifepristone, as NSAIDs may reduce the effect of mifepristone. - Quinolone antibiotics: Animal data indicate that NSAIDs may increase the risk of seizures associated with quinolone antibiotics. Patients taking NSAIDs and quinolones may have an increased risk of developing seizures. - Tacrolimus: Possible increased risk of nephrotoxicity when NSAIDs are co-administered with tacrolimus. - Zidovudine: increased risk of haematological toxicity when NSAIDs are administered with zidovudine.

Considering the reduced content of active ingredient and its local use, it is unlikely that overdose situations will occur. Symptoms The majority of patients who ingest clinically significant amounts of NSAIDs develop nausea, vomiting, gastrointestinal irritation, epigastric pain, or more rarely diarrhea. Tinnitus, headache and gastrointestinal bleeding are also possible. In more severe cases of NSAID intoxication, central nervous system toxicity is observed, manifesting as drowsiness, occasionally excitability, blurred vision, and disorientation or coma. Occasionally, patients develop seizures. In cases of severe NSAID intoxication, metabolic acidosis may occur and the prothrombin time / INR may be prolonged, possibly due to interference with the action of circulating coagulation factors. Acute renal failure and liver damage can occur. An exacerbation of asthma in asthmatics is possible. Treatment Treatment should be symptomatic and supportive and should include maintaining a patent airway and monitoring cardiac function and vital signs until stabilization. Oral administration of activated charcoal and, if necessary, correction of serum electrolytes should be considered if the patient presents within one hour of ingesting a potentially toxic amount. Seizures should be treated with intravenous diazepam or lorazepam if they are frequent or prolonged. Administer bronchodilators for asthma. There is no specific antidote for flurbiprofen. 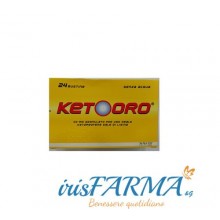