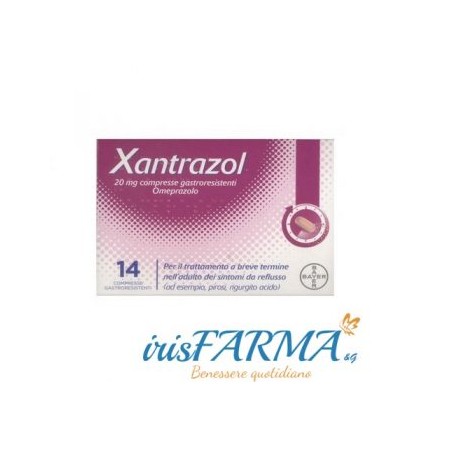 ► Indicated in case of heartburn.

Antacids Others products at unbeatable price
Discover all products

Pink, oblong, biconvex, film-coated tablets, debossed on one side and 20 mg on the other side, containing gastro-resistant granules.

It may be necessary to take the tablets for 2-3 consecutive days to improve symptoms.

No dosage adjustment is necessary in patients with impaired renal function.

Dosage adjustment is not necessary in elderly patients.

It is recommended to take Xantrazol tablets in the morning, preferably on an empty stomach, swallowed whole with half a glass of water. The tablets should not be chewed or crushed.

Break the tablet and disperse it in a tablespoon of still water or, if you prefer, mix it with fruit juice or apple puree. The dispersion must be swallowed immediately (or within 30 minutes). The dispersion must be mixed before drinking it. Rinse the bottom with half a glass of water. DO NOT USE milk or sparkling water. The gastro-resistant granules must not be chewed.

Hypersensitivity to omeprazole, substituted benzimidazoles or to any of the excipients.

Omeprazole, like other proton pump inhibitors, should not be administered concomitantly with nelfinavir.

[su_spoiler title = "WARNINGS AND PRECAUTIONS FOR USE"style =" fancy "icon =" chevron-circle "] In the presence of alarm symptoms (eg significant unintentional weight loss, recurrent vomiting, dysphagia, haematemesis or melaena) and when the presence of a gastric ulcer, the malignant nature of the ulcer should be excluded as the symptomatic response to therapy could alleviate symptoms and delay a correct diagnosis.

Treatment with proton pump inhibitors may cause a slightly increased risk of Salmonella and Campylobacter gastrointestinal infections.

Patients should be advised to consult a physician if:

Have had previous gastric ulcer or have undergone gastrointestinal surgery

Have jaundice or have severe liver disease

They are over the age of 55 and their symptoms are new or have recently changed.

Patients should not take omeprazole as a preventative treatment.

An increased level of Chromogranin A (CgA) can interfere with diagnostic tests for neuroendocrine tumors. To avoid this interference, Xantrazol treatment should be stopped for at least 5 days before CgA measurements. If the CgA and gastrin levels have not returned to the reference range after the initial measurement, measurements should be repeated 14 days after discontinuation of the proton pump inhibitor treatment. [/ Su_spoiler]

Effects of omeprazole on the pharmacokinetics of other active substances

Gastric pH-dependent absorption of active substances may be increased or reduced by decreased intragastric acidity during treatment with omeprazole.

Plasma levels of nelfinavir and atazanavir decrease when omeprazole is co-administered.

Concomitant administration of omeprazole and nelfinavir is contraindicated. Co-administration of omeprazole (40 mg once daily) reduced the mean nelfinavir exposure by approximately 40% and reduced the mean exposure of the pharmacologically active metabolite M8 by approximately 75-90%. The interaction may also involve CYP2C19 inhibition.

Concomitant treatment with omeprazole (20 mg / day) and digoxin in healthy subjects resulted in an increase of 10% the bioavailability of digoxin. Digoxin toxicity has rarely been reported. However, caution is advised when using high-dose omeprazole in elderly patients. Therapeutic monitoring of digoxin should therefore be increased.

Omeprazole is a moderate inhibitor of its main metabolising enzyme, CYP2C19. Therefore, the metabolism of concomitant active substances also metabolised by CYP2C19 may be decreased and systemic exposure to these substances increased. Examples of such drugs are R-warfarin and other vitamin K antagonists, cilostazol, diazepam and phenytoin.

Omeprazole, given as 40 mg to healthy volunteers in a cross-over study, increased cilostazol Cmax and AUC by 18, respectively.% and of 26% and one of its active metabolites respectively of 29% and 69%.

Concomitant administration of omeprazole and saquinavir / ritonavir resulted in an increase in plasma levels of saquinavir up to approximately 70% with good tolerability in HIV-positive patients.

Concomitant administration of omeprazole has been reported to increase the serum levels of tacrolimus. Monitoring of tacrolimus concentrations and renal function (creatinine clearance) should be increased and, if necessary, the tacrolimus dosage should be adjusted.

When given together with proton pump inhibitors, an increase in methotrexate levels has been reported in some patients.

When methotrexate is administered in high doses, a temporary withdrawal of omeprazole should be considered.

Influence of other active substances on the pharmacokinetics of omeprazole

As omeprazole is metabolised by CYP2C19 and CYP3A4, the active substances inhibiting CYP2C19 or CYP3A4 (such as clarithromycin and voriconazole) may increase the serum levels of omeprazole, decreasing its rate of metabolism. Co-administration of voriconazole results in more than double exposure to omeprazole. Since the administration of high doses of omeprazole was well tolerated, no dose adjustment of omeprazole is generally necessary. However, dose adjustment should be considered in patients with severe hepatic impairment and in the case of long-term treatment.

Active substances inducing CYP2C19 or CYP3A4 or both (such as rifampicin and St. John's wort) may lead to a decrease in the serum levels of omeprazole, increasing the metabolism of omeprazole.

The results of three prospective epidemiological studies (more than 1000 outcomes of exposed patients) indicate no adverse effects of omeprazole on pregnancy or on the health of the fetus / newborn. Omeprazole can be used during pregnancy.

Omeprazole is excreted in breast milk but is unlikely to affect the infant when administered in therapeutic doses.

It is unlikely that Xantrazol will affect the ability to drive or use machines. Adverse drug reactions such as dizziness and visual disturbances may occur. If they suffer from it, patients should not drive or operate machinery.

The following adverse reactions, identified or suspected, have been identified during clinical trials with omeprazole and post-marketing. In no case was a correlation with the administered drug dose established. Undesirable effects are classified by frequency and Organ Classification System (SOC). Frequency categories are defined using the following convention: Very common (≥1 / 10), Common (≥1 / 100 to

There is limited information available regarding overdose with omeprazole in humans. Doses up to 560 mg are reported in the literature and there have been occasional reports of single oral doses up to 2,400 mg of omeprazole (120 times the usually recommended clinical dose). Nausea, vomiting, dizziness, abdominal pain, diarrhea and headache have been reported. In individual cases, apathy, depression and confusion were also observed.

The symptoms described were transient and no serious consequences were reported. With increasing doses the elimination rate did not change (first order kinetics). Treatment, if necessary, is symptomatic. [/ Su_spoiler]

Store in the original package in order to protect from moisture. 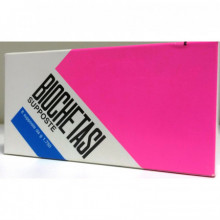 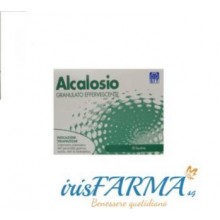