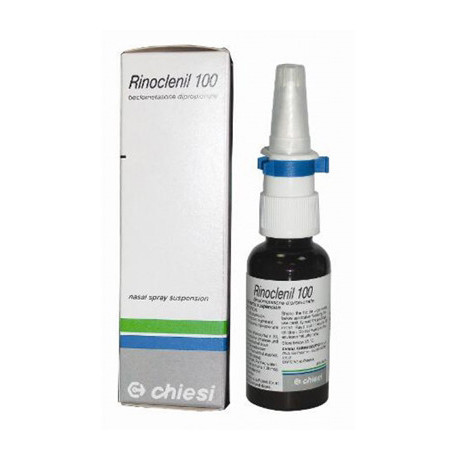 Prophylaxis and treatment of seasonal and perennial allergic rhinitis and vasomotor rhinitis.

Rinoclenil should only be administered via the nose. Dosage Adults and children over 6 years: two sprays in each nostril once a day. In children, if deemed appropriate, a schedule of administration in divided doses can be maintained, making a single injection in each nostril twice a day. The onset of the effect is not immediate and for a complete therapeutic benefit it is advisable to use the product regularly and for several days. Children under the age of 6: the product should not be administered to children under 6 years of age. Instructions for Use Shake the bottle vigorously before each administration. Furthermore, before starting the therapy, it is advisable to remove the protective cap, the protective ring and operate the dosing pump several times to activate the nebulization mechanism. Proceed with dispensing as follows: 1) Carry out a thorough cleaning of the nose. 2) Remove the protective cap. 3) Laterally remove the protection ring that blocks the pump. 4) Hold the bottle between your fingers. To activate the spray mechanism, operate the dosing pump several times until a visible spray is obtained. 5) Place the nasal nozzle on one nostril, closing the other nostril with a finger. Breathe in and press the base of the nasal nozzle at the same time. In this way, an exactly dosed single dose of active ingredient is delivered. Repeat the same operation on the other nostril. 6) After use, replace the protective cap and the protective ring. If the dispenser is clogged, wash it thoroughly with lukewarm water, without touching the hole with sharp objects.

Hypersensitivity to the active substance or to any of the excipients listed in section 6.1. Local viral and tuberculous infections. Contraindicated in children under 6 years of age.

Systemic side effects are extremely unlikely due to the low doses used. Systemic effects may occur with intranasal corticosteroids, particularly when prescribed in high doses for prolonged periods. These can include growth retardation in children and adolescents. However, particular caution must be exercised in prolonged use of the product, keeping the patient under control in order to promptly reveal possible systemic effects (osteoporosis, peptic ulcer, signs of secondary adrenal insufficiency). As with other nasal preparations, a burning sensation, irritation, dryness and more rarely epistaxis may occur locally. Rare cases of nasal septal perforation have been reported following nasal corticosteroid applications. Rare cases of increased intraocular pressure or glaucoma have been associated with nasal formulations of beclomethasone dipropionate. Cases of blurred vision have been observed with an unknown frequency (see also section 4.4). In case of infection, institute suitable therapy. Reporting of suspected adverse reactions Reporting of suspected adverse reactions that occur after authorization of the medicine is important, as it allows continuous monitoring of the benefit / risk ratio of the medicine. Healthcare professionals are asked to report any suspected adverse reactions via the national reporting system at: http://www.agenziafarmaco.gov.it/content/come-segnalare-una-sospetta-reazione-avversa.

Systemic effects may occur with intranasal corticosteroids, particularly when prescribed in high doses for prolonged periods. In any case, treatment must be suspended and appropriate therapy instituted. These effects are less likely to occur than with oral corticosteroid treatment and may vary in individual patients and between different corticosteroid preparations. Possible systemic effects include Cushing's syndrome, Cushingoid aspect, adrenal suppression, growth retardation in children and adolescents, decreased bone mineral density, cataracts, glaucoma and, more rarely, a range of psychological or behavioral effects including, sleep disturbances , anxiety, depression or aggression (particularly in children) or neurological such as psychomotor hyperactivity. It is recommended that the height of children receiving prolonged intranasal corticosteroid treatment is regularly monitored (see section 4.8). Although RINOCLENIL controls the symptoms of allergic rhinitis in most cases, an abnormally high allergen stimulus may in some cases require appropriate adjunctive therapy in particular to control ocular symptoms. The replacement of systemic corticosteroid therapy with topical therapy (Rinoclenil) requires caution, especially where there is reason to believe that there is some degree of impairment of adrenal function. Systemic effects (osteoporosis, peptic ulcer, signs of secondary adrenal insufficiency) may occur in individuals who are particularly sensitive or predisposed due to recent therapies with systemic steroids, or if doses of beclomethasone nasally are taken in excess of what is recommended. Visual disturbances Visual disturbances may be reported with the use of systemic and topical corticosteroids. If a patient presents with symptoms such as blurred vision or other visual disturbances, referral to an ophthalmologist should be considered for evaluation of possible causes which may include cataracts, glaucoma, or rare diseases such as central serous chorioretinopathy (CSCR), which have been reported after use of systemic and topical corticosteroids. Rinoclenil should not be used after trauma or nose surgery (until healing) and in the presence of nasal ulcerations, unless prescribed by your doctor. In patients receiving systemic corticosteroids, the product should be administered under medical supervision. Do not use for more than a month without consulting your doctor. Excessively prolonged use of topical corticosteroids can cause temporary suppression of the hypothalamic-pituitary-adrenal axis, resulting in secondary adrenal insufficiency. Infections of the nasal passages and sinuses must be treated appropriately, however they are not a specific contraindication to the use of Rinoclenil. Warnings relating to excipients The product contains benzalkonium chloride, an irritant that can cause local reactions. Benzalkonium chloride (BAC) contained as a preservative in Rinoclenil, especially when used for long periods, can cause swelling of the nasal mucosa. If such a reaction (persistent nasal congestion) is suspected, a BAC-free nasal medicine should be used if possible. If such nasal medications without BAC are not available, another pharmaceutical form should be considered. It can cause bronchospasm.

Beclomethasone is less dependent on CYP3A metabolism than other corticosteroids and, in general, interactions are unlikely; however, as the possibility of systemic effects with concomitant use of strong CYP3A inhibitors (e.g. ritonavir, cobicistat) cannot be excluded, caution and adequate monitoring of the use of these agents are recommended.

Administration of large quantities of beclomethasone dipropionate over a short period of time may result in suppression of hypothalamic-pituitary-adrenal function. In this case, the dose of RINOCLENIL should be reduced immediately to the recommended dose.