- Paracetamol how many times a day?

For clarity, let's look at some examples:

-If I have a slight headache or fever I will take 500mg orally.

-If I have a severe toothache or severe post-op pain I will take 1000mg orally.

How many times a day?

Is paracetamol bad for you?

Like any drug, paracetamol can have side effects but in general it is a well-tolerated drug in the right dosages. If the recommended dosages are exceeded, liver damage may occur as the drug is hepatotoxic. It is advisable to take paracetamol and all medicines with caution and only when strictly necessary.

Is paracetamol useful for colds?

Acetaminophen 1000mg is often recommended for adults to cope with cold and other flu symptoms, even in the absence of a fever. In reality, most of the time this approach is not useful as the drug has no anti-inflammatory action. In these cases, other drugs such as ibuprofen or paracetamol in combination with other active ingredients will be more useful.

Do I have a stuffy nose, congested airways, cheekbone pain, earache, sore throat?

In these cases there is inflammation, edema with consequent blood dilatation. It will be more effective to take ibuprofen or paracetamol associated with decongestant active ingredients such as pseudoephedrine or phenylephrine.

Pay attention to the dosage of paracetamol (as with any drug) and do not exceed 3-4 grams per day for adults and 90mg/kg for children.

Always prefer, if possible, use orally rather than rectally.

Acetaminophen is useful for most pain and fever but has no anti-inflammatory action.

You can find all medicines containing paracetamol on our website by clicking on this link. 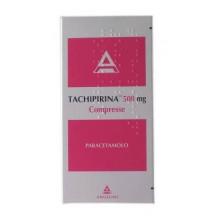